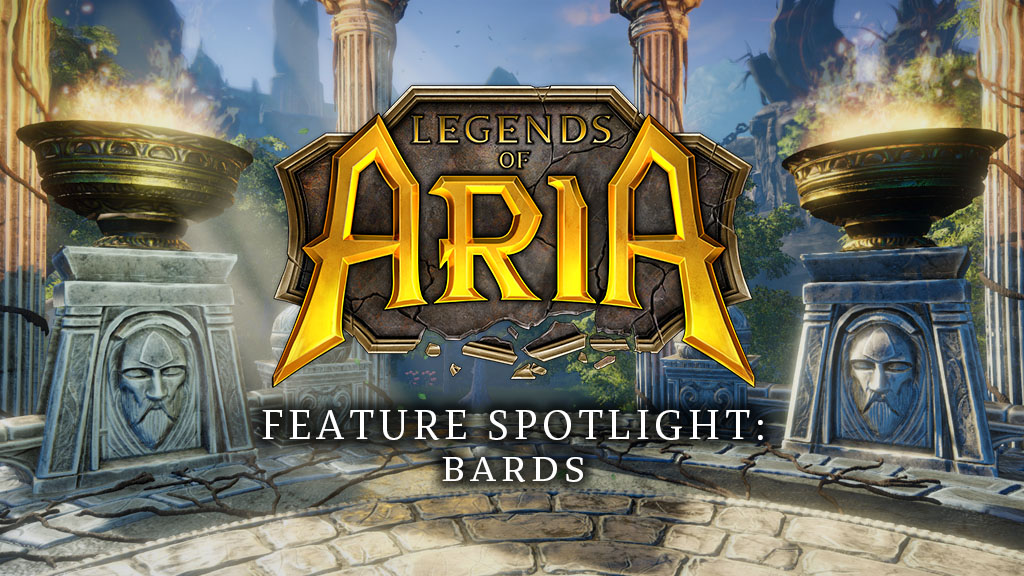 Bards have arrived! Today’s post is going to detail the new Bard profession, which brings 2 new skills, 9 new bard abilities, and a host of new possibilities to Legends of Aria.

Musicianship is coming to Aria and can be gained by using any one of our three new musical instruments: the drum, lute, and flute. Sufficient musical ability is essential should any aspiring bard hope to produce inspiring and regenerative performances.

Musicians may perform alone or form a band of a maximum of 3 members, each requiring an appropriately unique instrument. We considered allowing a trio of drummers but it sounded like… well… a trio of drummers. Patrons and weary travellers may choose to listen to performers and in doing so form a mutually beneficial relationship. Listeners increase the potential skill gain of aspiring musicians whilst the musicians themselves actively restore the vitality of the listeners.

Vitality has been improved to play an increasingly important role in Legends of Aria. Vitality is lost as players engage in daily tasks in the world of Celador, from chopping trees and fishing to the inevitable and all too frequent dirt nap. Restoring Vitality will be an essential function to keep your character strong and, most importantly, well maintained vitality is essential to ensure maximum stats and optimum rates of skill gain. It’s worth noting that Vitality regeneration may only be offered by performing musicians within established Inns & Taverns.

We hope that these changes create some warm and welcoming tavern experiences, offer up some strictly social, non-combat roles, and also to serve the ulterior motive of combating those who may seek to gain skills unlawfully. We trust that all of our players are at their keyboards during skill gains so we thought we’d reward you all with the opportunity to take 5 minutes away from all the adventuring to catch your breath.

Musicianship also serves another fundamental purpose and that is to form the backbone of our third new skill in this Steam release: Entertainment.

The Entertainment skill governs your ability to perform potent Songs and Riddles with the power to both inspire and demoralise. Songs are channelled abilities which slow the performer, affecting all allies within a short area whilst restoring their respective health, mana or stamina. Such songs are an incredibly powerful addition to any hunting party and are versatile in their ability to adapt to the participants in any given party. They do, however, leave the performer vulnerable to attack and thus Bards must be protected to ensure their potential is not wasted.

In addition to Songs, Bards may engage in Riddles. Riddles can bewilder and dumbfound their victims and are split between those most effective against humans and those more effective versus creatures. Creatures are often a little less sophisticated and, when performed, riddles take on an AoE effect. The riddles of Force and Havoc, for example, will increase the damage taken by physical or magical damage respectively. Such riddles will no doubt become staples in dungeon parties to maximise DPS, as well as offering lone adventurers a very welcome increase in damage.

Humans, on the other hand, are less easily manipulated and so these riddles are target specific and require constant focus and to be performed against a single target. Once performed, such riddles are effective at reducing an opponent’s ability to resist magical spells, stuns, or poisons. Unlike Songs, Riddles allow the performer to engage freely during their effect and thus offer a particularly strong complementary skill set in both PvE and PvP.

Entertainment and Musicianship together are the two pillars of the Bard profession and are versatile in the range of professions and templates they can be applied to. We look forward to seeing the host of templates you come up with and to finally hear our taverns rich with the sound of music and sound of tips falling into empty ale mugs.

We hope you’ve enjoyed this blog post and we look forward to sharing the next with you shortly. Don’t forget to tell your friends that Steam launch is approaching this August 6th! Tell them you need a Bard!