Buckle up, buttercups, this is going to be loooooooong. We have been crunching on an update for you!

I’m not sure that’s an actual word, but we’re rolling with it. One of our mottos is “if it doesn’t exist, it’s up to us to put it out there,” after all.

What is it? Basically, it an entirely new way to handle coloring objects in the world. Something made of leather and metal in the same armor set, it’s currently all blue. In the new system, should you want to use cobalt colored metal in your mixed armor, just the metal bits would be blue. Also, adding color in the current system really just made stuff darker. Now we can do proper colors, including lighter shades. Finally, stuff you make will take on the aspects of the material you made it from. Did you mine some starry purple ore? Now it automatically makes starry purple metal armor. 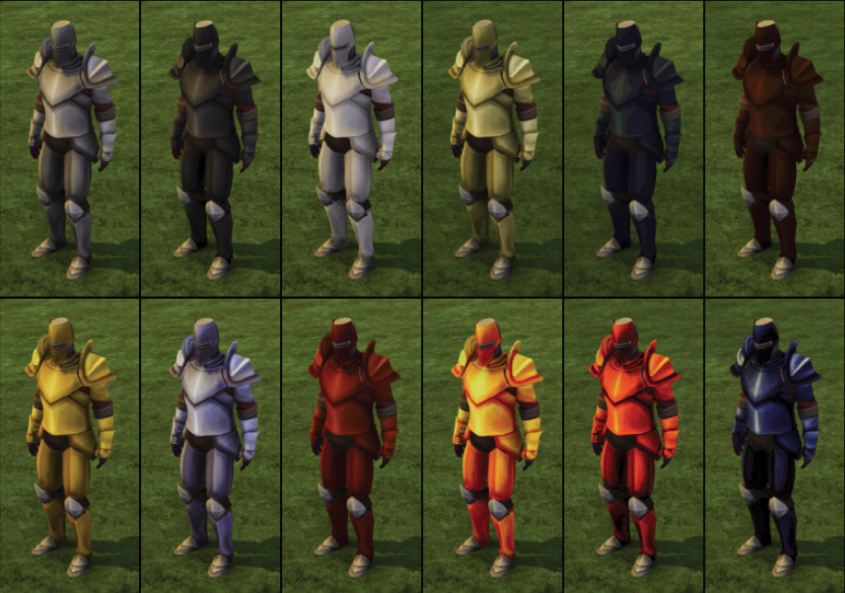 NOTE ABOUT THAT IMAGE: Those are test images. While all those colors will indeed be in the upcoming patch, some may only be accessible by those with admin powers for the foreseeable future.

Why now? The current system has been a massive block for design and for player differentiation. Being able to be a unique person is key to the feeling of LOA. This is going to open up all kinds of options for new content, and it’ll blow the player economy wide open.

It also lays the groundwork for customization things like dye and dye tubs (though when you get your hands on those is still being decided as I type).

What does this mean for your existing items? Not much, honestly. They might not be pretty, you will probably want new stuff, but it should all be as functional as it was before. As you know, there will be a server wipe someday, but that day is not now.

Mostly client side optimization, not server side (though we are hard at work on that as well – just not likely to make it into this patch). You should see positive changes, but please note, this is not complete. We’ll be continuing to optimize for months to come. 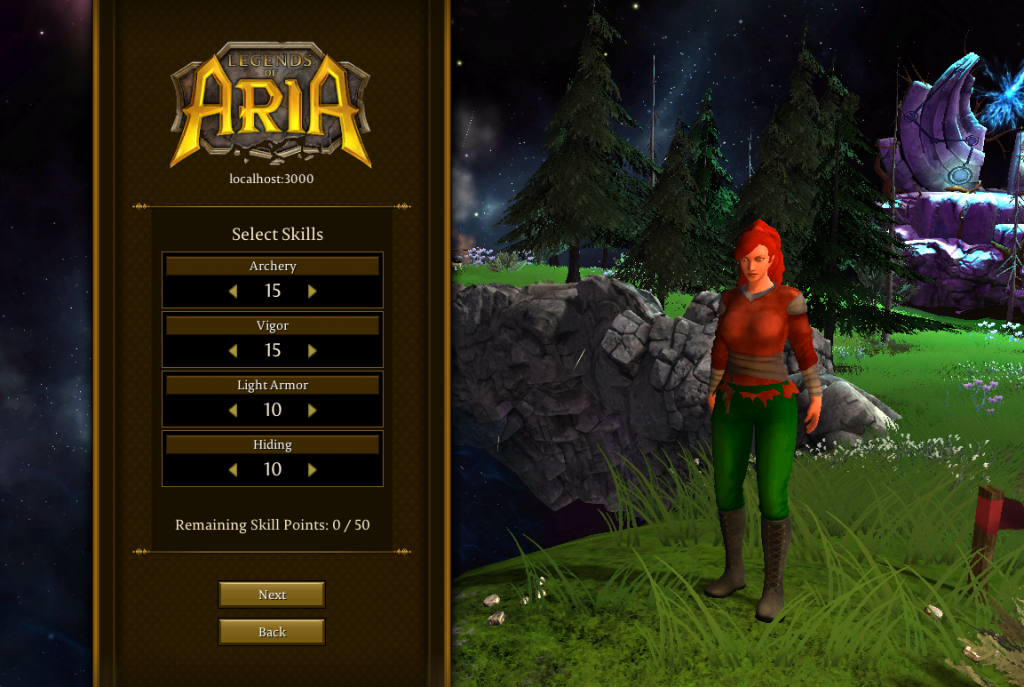 One of the key things about LOA is that you aren’t forced into a box or onto a track with a few meaningless “skill tree” options that steer you toward, at best, two builds with minor variations. However, our character builder at the very beginning created the impression that you were picking one of five classes. Because this kind of game needs to be reintroduced to the gaming public at large, we needed to make clear from the beginning that in LOA, you DON’T pick a class. Now there are some skills and skill points to allocate as you choose. We hope the new process better reflects our open ended game. 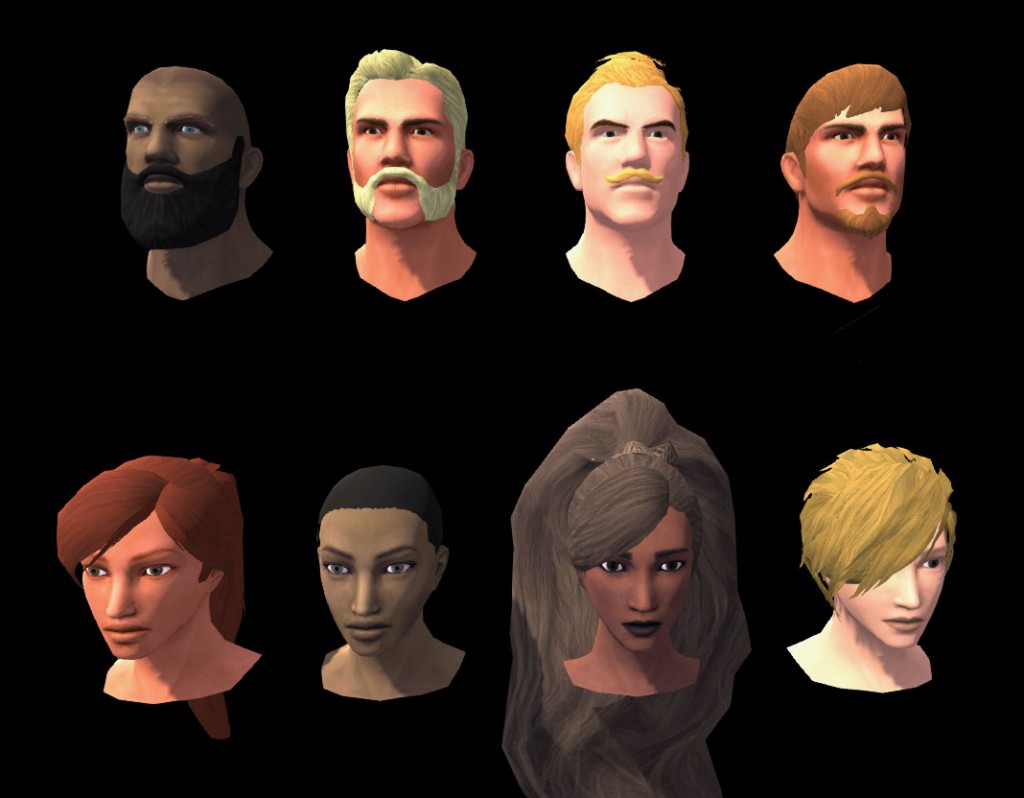 The two most notable interface improvements are 1) double clicking to use things instead of right clicking everything, and 2) you’ll be able to click on someone/something’s health bar and drag it around your screen until it best suits you.

Other things may appear in the patch notes. We are trying to tackle things like players and their pets getting stuck while casting recall, the statue breaking bug, and other things that are basically sand in the gears of your day.

2. So when is this update happening?

The 30th, if it all goes to plan. Potentially earlier “Experimental” testing, so remind yourselves of what the NDA says if you might want to get in on that 😉

Right. So, first and foremost, we’re redoing our roadmap as soon as we finalize dates. We’ve learned a LOT since we started testing the game with you, and the big thing we’ve learned is that there is zero chance of an open beta in April. I was actually gearing up to tell you that CB2 wouldn’t start until the end of April, or even possibly May. I know that’s a bit abrupt, but I’ve been chatting with the community on our forum, and I know you want to hear it straight with no…baloney.

Second, we’re going to be at PAX East in Boston from April 5-8 (and we hope to see you there, so much so that I’ll be doing a contest with a PAX badge as the prize!). If you’re not familiar with the convention, it’s a major opportunity to let players spend some hands on time with the game and make new friends. We’ll announce the new roadmap while we’re there, as well.

Typically, game companies create a special demo for conventions. Characters that have every single ability, monsters that drop loot like a pinata, endless gold, and crafting that succeeds 100% of the time.

We think players actually hate those things in the long run because you never know if you played the real thing or a Potemkin village. Plus, we’re a small and scrappy team, even with the addition of two new programmers. Everything we do, EVERYTHING, has to ultimately serve the real game. And we can’t afford to do things twice.

So in order to demo the game, the real game, we wanted to get the new player creation process up. We needed to jack in some performance fixes. The hueing stuff will make everything look much better.

There didn’t seem to be a reason to give that stuff to a bunch of strangers at PAX and not to you, just to “save it” for the next phase of beta.

As a matter of fact, we badly need you to test the hell out of these things even though the patch isn’t part of an official beta stage. You see, it’s going to go up to you only a few days before we demo the game to outsiders. We need you to hammer the crap out of it and report all the bugs you find so we have a prayer of getting it cleaned up.

After PAX, we’re going to sit down and figure out what’s in the rest of the build for CB2. (I’ll be asking for your input on that later, by the way.) And go from there.

Will you help us test this build?