Welcome to the second Legends of Aria Development Blog.

Last week we discussed our new vision for Combat. This week we’d like to offer you an introduction to the Knight Prestige Class in Legends of Aria.

Just a reminder that our Legends of Aria Alpha 2 launch has been rescheduled to May 12th. This is to allow for final changes & additions in preparation for the upcoming test!

Before going into detail on our Prestige Classes, we’d like to discuss why we feel that Prestige Classes are going to be a great edition to Legends of Aria and what the system bring to skill orientated games.

Legends of Aria is built upon a robust core skill system. We believe that ‘train through use’ skills and clear and concise feedback between skills and their effects is what defines our gaming experience. Skill based systems offer the purest platform to choose your desired template for a given character and train that character to the height of his chosen profession. Such worlds are tailored to reward you in your pursuit of your own goals, affording you the tools to accomplish them in a way which suits you.

This framework relies on a carefully crafted system, offering player as many choices in a given situation as possible. In many respects, it dictates a very general approach to game design, avoiding attention to detail or specific character meta which is more common in conventional MMOs. Creating class orientated experiences inevitably comes at the cost of player freedom and damages the real world aspects of skill driven games. Adding specific meta within a skill based system can wreak havoc on balance and scalability. Through Prestige Classes we have created a supplementary system which protects our core gameplay whilst using classes to give players greater options.

What we have accomplished with Prestige Classes is to leave our core skill systems very much intact. When engaging in combat, a characters skill set and technique is the foremost determinant in battle, we’ve stayed well away from a rock/paper/scissor outcome. Prestige Classes offer players an added layer of complexity to suit and expand their playstyle, increase the potential skill curve of PvE and PvP encounters and offer immersive roles to players who want to push their characters in a certain direction. 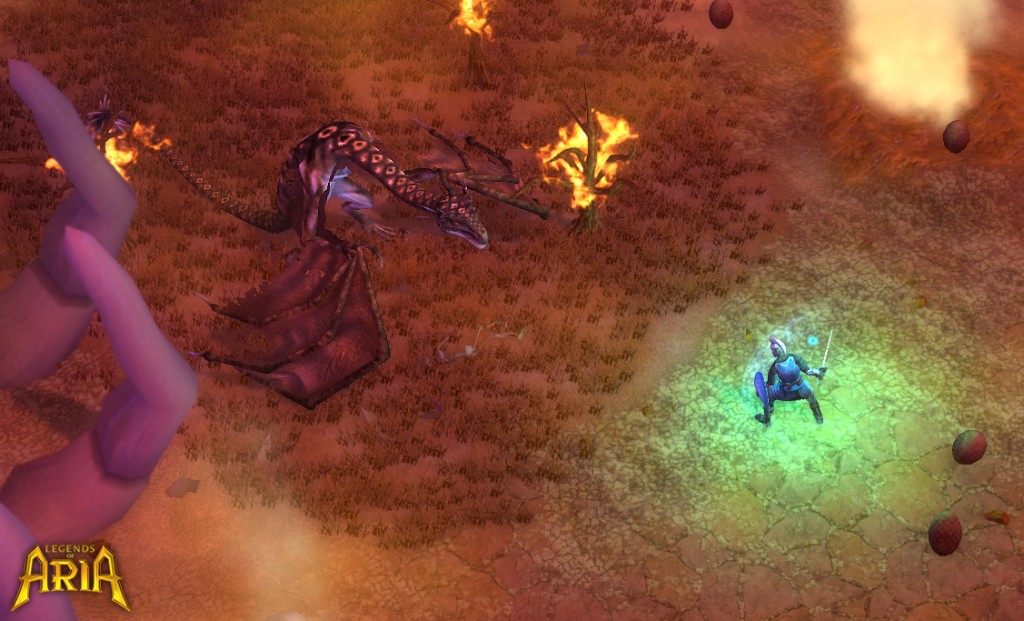 What is a Knight?

The Knight prestige class grants players new options in creating a defensively minded specialisation for warriors through a selection of new and exciting abilities.

Knights excel in survivability and damage mitigation. Knights may occupy the front lines of combat and tank in dangerous monster encounters, whilst taking advantage of their survivability and stun to disrupt the enemy in PvP.

In order to access The Knight, a player must meet certain prerequisite skills and obtain the Knight Prestige Scroll. Once unlocked, the prestige skill will be added to your skill list and occupy the equivalent of 1 skill at Grandmaster level (100 points of your total skill cap).

All prestige classes begin at first level and progress via an experience system. Players may then unlock advanced abilities as they progress to subsequent levels.

Heroism is a staple ability for heavily armoured Knights, increasing armor and taking the pressure off your party members. Herosim has great synergy when paired with Vanguard or with company with AoE capabilities.

Shield Bash is a great tool for controlling large numbers of monsters or to afford vital seconds in a sticky situation. It’s also an invaluable PvP tool in the field.

Vanguard offers a both a powerful AoE attack and strong defensive buff at the cost of mobility.

Heading into Alpha 2, Prestige classes are currently limited to 1 per character with 3 abilities per Prestige Class. This is just a beginning as we plan to expand these classes to allow players to create more diverse and specialised characters. 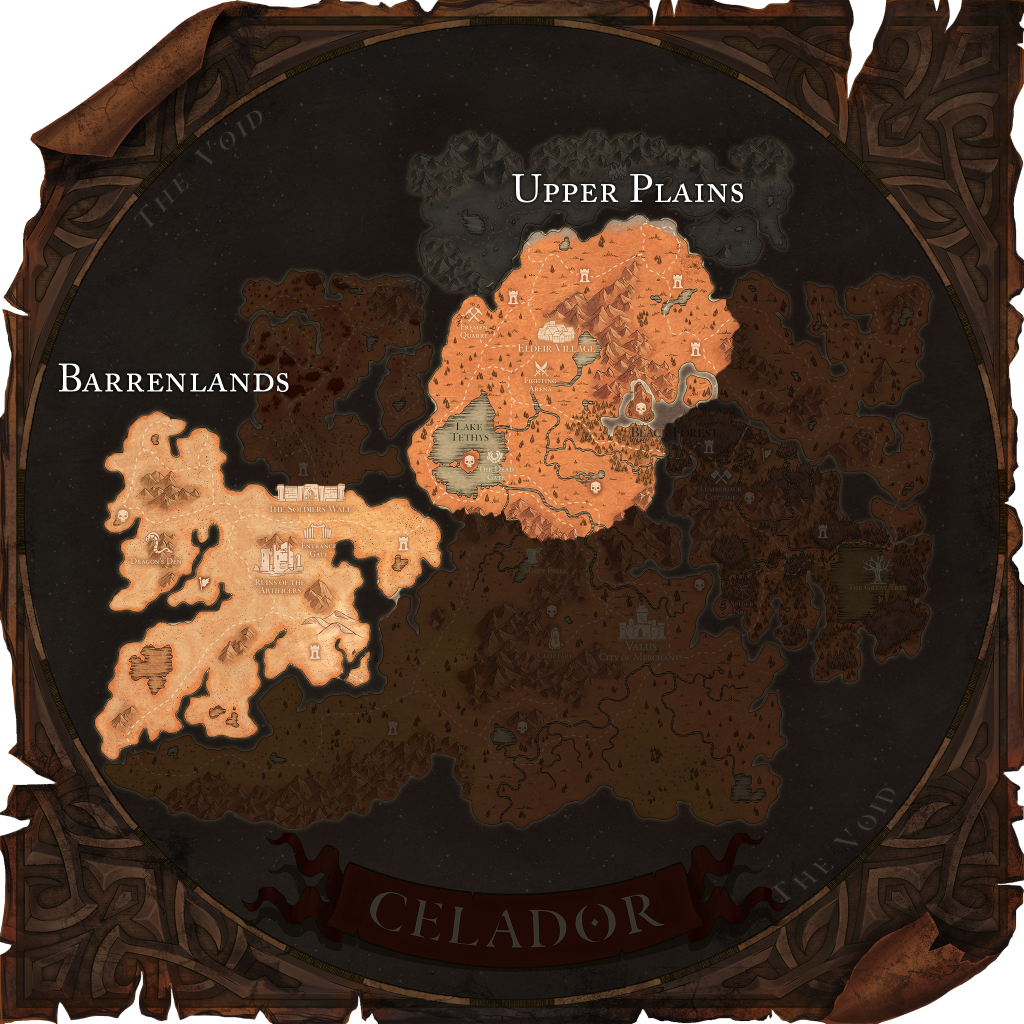 The first Alpha 2 test will feature the Upper Plains and Barren Lands regions. The areas designated in green is the guaranteed protection zone – criminal activity in this area will be punished. Beyond this exists the buffer zone occupied by guard towers and guard patrols. Criminal activity is possible within this area, however guards stationed in the blue zones actively patrol the routes between their stations. 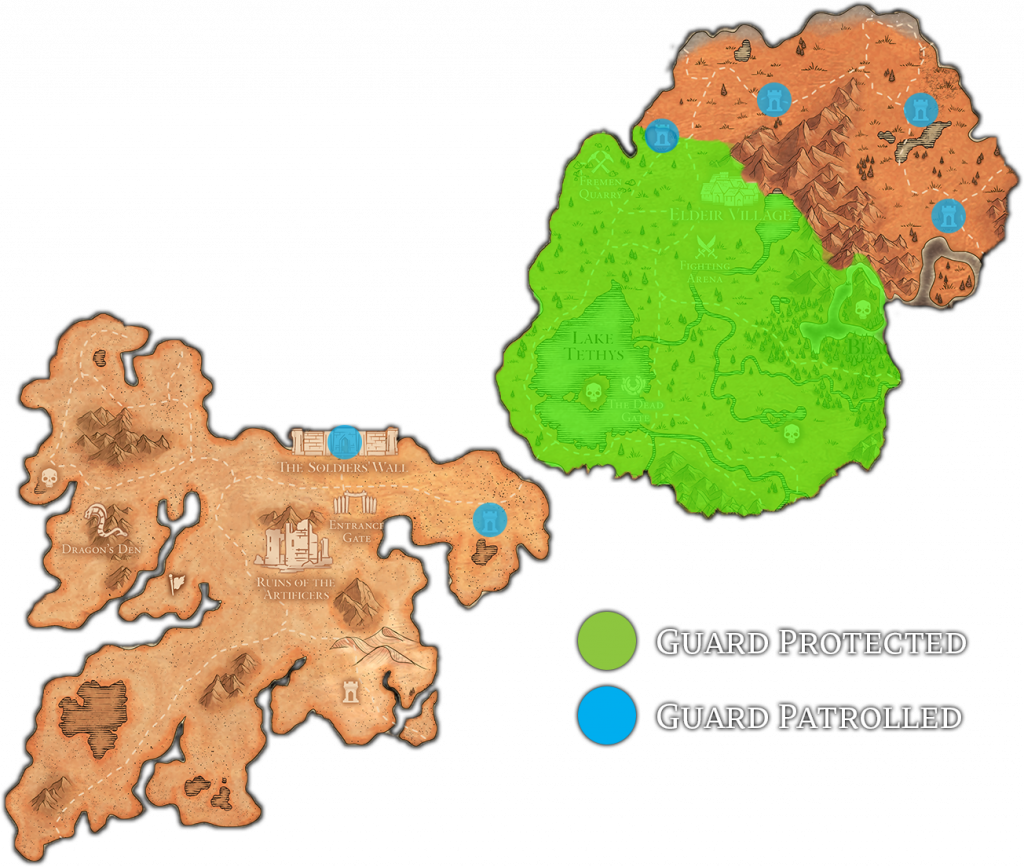 The Upper Plains is a familiar region to those who have tested Shards Online in the past, however it has grown enormously. The Upper Plains is home to Eldeir Village, Fremen Quarry and the iconic Dead Gate. Despite existing under strong guard presence, the Upper Plains is inhabited by various Goblins, Ogres and other monstrosities. Several dungeons also exist in the wilderness for adventurers to explore.

The Barren Lands is a desolate region of vast deserts and towering mountains and canyons. Within lies the ancient Soldiers Wall, the Ruins of the Artificer and the perilious Dragon’s Den. The Dragon’s Den is a unique area within our test, featuring our Awakening System. More on this in upcoming blogs!

Please head over to our Forum Discussion Thread to give us your feedback and questions!